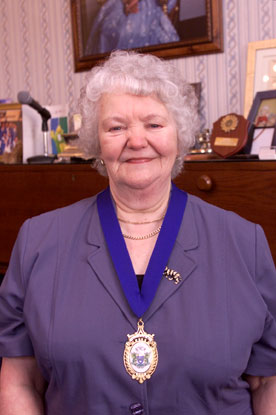 A Dundee woman who devotes her time to working with action groups to improve the city for the good of the whole community was yesterday named this year's Citizen of the Year.

Rena Smith fought off stiff competition to receive the prestigious title from the Lord Provost John Letford at the City Chambers. Great-grandmother Rena impressed the judging panel with her dedication to her community in Dundee through local and national organisations.

Nominated by staff at Douglas Community Centre and Dundee City Council's neighbourhood development department, the proposal stated that Rena "is a tireless worker for the community of Douglas and has contributed greatly to the quality of life of the residents. No issue is too great, even if it means campaigning nationally."

Rena's involvement with local issues began a decade ago when she joined her first tenants group.

"I realised there were problems in the area, so I joined a community action group", she said. "When that dissolved, I was asked to join the Balmoral Residents' group and am now secretary and treasurer of the group."

It was through the Balmoral group that Rena helped to create and publish the award-winning community Newsletter Douglas Live and Kicking.

She is also a director of the Tenants' Information Service (TIS) and executive member of the Scottish Tenants Organisation and is the secretary of the Dundee Federation of Tenants.

"Being part of TIS allows me to meet different people from all over Scotland and we can share ideas and take the best ones back to implement in our locality," added Rena.

Originally a shorthand typist, Rena left her job to raise her family when she married, but returned to work in Timex, where she stayed for 16 years. She has four daughters and one son, six grandchildren and two great-grandchildren.

With three of her children living with their families in Australia, she has not had the opportunity to tell them about her achievement yet, but is sure that they will be very proud of her.

Presenting the award, Mr Letford said that this year was slightly unusual as the trend had been for the Citizen of the Year to be involved in the entertainment scene.

However, Rena's involvement with the community was so impressive that she was an obvious choice.

"Rena is an exceptional example of a dedicated individual who gives up so much of her time for others," he said.

A civic reception will be held next week in honour of Rena and to thank the previous citizens of the year.