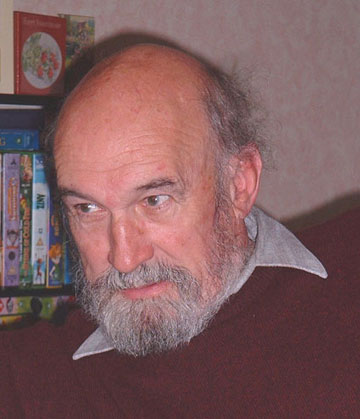 Gordon Laird attended the School from 1941 to 1947. He was the Senior Sports Champion. From his earliest days he had an ambition to be an artist in which he was encouraged by the then Head of the School’s Art Department, the highly respected Arthur Law, who Gordon regards as one of the finest teachers he studied under.

On leaving school he went to Dundee College of Art and studied drawing and painting. On graduation, he worked as a designer with Valentine and Sons, the Fine Art Publishers. After studying at the Teachers Training College, he entered teaching in 1953.

He taught in various Primary and Secondary Schools in Dundee before being appointed a lecturer at the Dundee College of Commerce, later becoming Head of Art and Liberal Studies and then Assistant Principal. He is now retired.

His paintings are now much sought after and are in many private and public collections. A signed limited edition of 750 prints of his painting of the Harris Academy were sold to raise funds at the School’s Centenary Celebrations in 1985.

From playing rugby for the School and the FPs, his interest in sport continues unabated to this day. A member of the Bonnet Makers Craft and Dyers Craft Guilds of Dundee, he holds the qualification DAFSA. He continues to paint and is working at the moment for an exhibition next year. He is much sought after as an after dinner speaker and as an entertainer at Burns Suppers.

Married to Sheena who was at the Harris from 1942 to 1948, he has two children, Calum and Shona, and four grandchildren. Now living at Kellas, where his love of gardens and gardening are amply catered for.