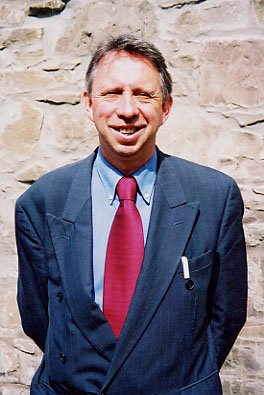 My first job on leaving the Harris in 1969 was as a collector of taxes initially here in Dundee but subsequently in London.

I returned to Dundee in 1974 and worked for a year with Brown & Tawse, steel stockholders on the Kingsway, as an assistant sales manager prior to undertaking a course in Academic Studies at Dundee College.

Following this, I enrolled at the University of Dundee, gaining an MA Honours Degree in Political Science and Modern History in 1980 and then completing a Postgraduate Diploma in Business Administration at Edinburgh University in 1981.

Following my time at University, I took a year out enjoying life in Edinburgh before returning to Dundee in 1982. From 1983 until my election to Parliament in 2001, I worked in Further Education, firstly as a Lecturer in General Studies at Angus College, Arbroath and from 1986 as a Lecturer and then Senior Lecturer in Public Administration at Dundee College. At the time of my resignation from the College to take up my Parliamentary seat I was the Team Leader and Senior Lecturer in Public Administration, Housing and European Studies.

My career in education was paralleled by my progress in politics, being elected to serve the West End for the first time in 1984 on the District and then the City Council. During my time as a Councillor I have served as the Leader of the Council; Cultural Services Convenor; Economic Development Convenor and from 1996 until I became the Member of Parliament for Dundee East in June, the Convenor of Housing.

With John McAllion being elected to represent Dundee East in the Scottish Parliament in 1999, I was selected in May 2000 as the Labour Party candidate to contest this seat at the next General Election.