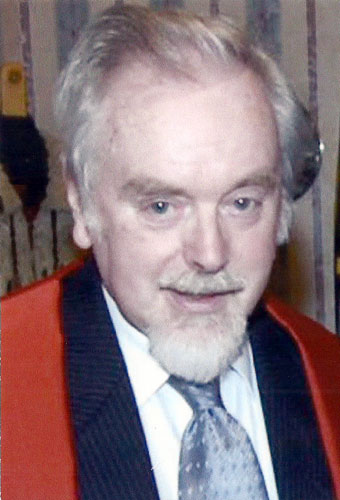 Ian Colligan was born in Dundee in 1939. He attended Blackness Primary School and Harris Academy where he was school dux in 1957. Upon leaving school he studied at the University of St Andrews followed by a post graduate course at Durham University. He returned to his native city to work for NCR in its newly formed Computer Centre. He married Isobel Pearson (another Harris FP) in 1964 and has one daughter and one son. In 1980 he went to lecture at what is now the University of Abertay Dundee, being appointed Head of the Department of Mathematical and Computer Sciences in 1985. He was awarded a professorship in 1988. Ian is a past president of Dundee Junior Chamber of Commerce, past Chair of the Dundee branch of the Chartered Management Institute, founder and Chair of the Dundee branch of the British Computer Society and past Chair of the Board of Dundee College. He was awarded the OBE in the birthday honours list of 2010 for his services to further education in Dundee. Ian then served on the Council of the FP Association and represented that body on the Harris Academy Rebuild Project Board.  In recognition of his distinguished service to the Association he was appointed to the post of Honorary Vice President of the Association, which post he held for a short period prior to his sudden death on 20 December 2019 as a consequence of a long illness which he bore with great fortitude, and which he never permitted to impede his outstanding contribution to the affairs of the Association.  In particular he inspired the set-up of the highly successful 100 Club which is designed "to help raise funds for the FP Association to enable it to support various projects within or pertaining to the School".