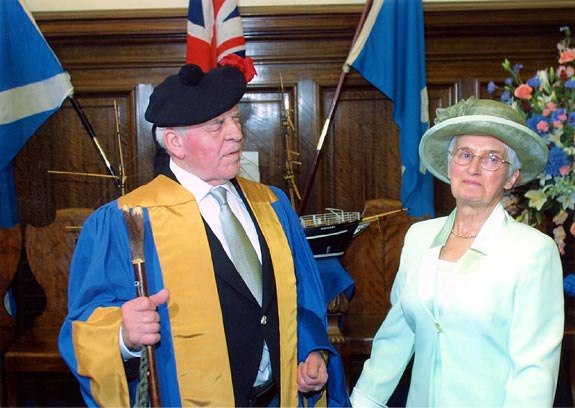 Chancellor, I have the honour to present for the Degree of Doctor of Laws, honoris causis, Mr Sydney Scroggie.

Syd Scroggie is many things - we’d call him an author and a poet, he calls himself an ‘inveterate scribbler’ or versifier; he can be described too as a hillwalker and climber, but the term he’d use is hill gangrel. The English meaning of this little used Scots word is tramp, vagrant or vagabond.

You may ask why the University of Dundee is conferring an honorary degree on somebody of this description.

Syd Scroggie was born in 1919, although in Canada rather than Dundee, but we can overlook this minor blemish as for most of his life he has lived in and around the city, and worked in it too. He was educated at the Harris Academy in Park Place (1928 - 1929) John Watson’s Institution in Edinburgh, where he excelled in running and rock climbing, returning to the Harris, now in Perth Road, to take his Highers in 1935 - 36. When he left school he joined D C Thomson’s, where he was the sub-editor of The Hotspur, a boy’s paper which only those of us beyond a certain age will remember.

During the Second World War he saw five years service, first in the Cameronian Rifles and later the Lovat Scouts. However, within weeks of the war’s end, at the age of 25 and on patrol in the Italian mountains, a land mine left him badly wounded. He lost much of his left leg, as well as the sight from both his eyes.

This however proved not to be an end but instead the beginning of a remarkable and inspirational period which has lasted the rest of his life.

Most of us imagine that if we were to be stripped of our sight and left with only one natural leg, the last place we would want to go would be into the hills.

Within ten years he was back in the Sidlaws, stick in hand and with the appearance of what has been called a ‘ragged covenanter’, to begin what was the first of over 600 walking and climbing expeditions. Many of these were long treks, involving rough and ready overnight stops in bothy shelters.

Evidently he never forgot the advice that was given to him when he was a boy by another lover of the Sidlaw Hills, John Ireland, who told him, gloriously politically incorrectly, that ‘Efter his mither, a man’s best freend is the hills’.

This however is only partly true, for one of Syd Scroggie’s passions is the companionship of his many friends, and of his wife, who have accompanied him on many of his walks. So too have his three children.

He is considered something of a legend by the mountaineering community not only in Tayside but also in Scotland, and fittingly, in June of last year a cairn and indicator was unveiled on the top of Balluderon Hill, as a tribute to his exploits in and love of the Sidlaw Hills.

Many tales are told of Syd Scroggie’s expeditions and adventures. One of the best I have come across was an occasion when he and his companion were late returning from a walk over Lochnagar, something which was beginning to cause some concern. But it shouldn’t have. The response of one walker who was told that someone was out late on the hill was, apparently, "It's no yon blind bugger Scroggie is it?"

Unusually, perhaps uniquely, Syd Scroggie has described his blindness as a ‘sort of adventure’. It is his refusal to accept blindness as a limiting factor in his life, as a physical prison, but instead his ability to challenge it, to consider it even as an opportunity, which has inspired his many admirers, young and old.

Certainly, his lack of normal sight has not blinded him to the practices of the much criticised Scottish tourist industry. The first few lines of one of his early verses, entitled ‘Parody’ are as acutely perceptive today as when they were first written:

‘O there’s bawbees in Lanark and siller in Skye
And profit in Hielands and Lowlands forbye,
But there’s nae greater love than the heart could desire
Than to fleece the fine tourists in bonny Strathyre
For it’s up in the morn and awa’ to the hill
Where the lang summer days put a pound on the bill
And the peak of Ben Vorlich is no muckle higher
Than the price you can charge for high tea in Strathyre

Some of his other poems have been described as earthy, but sadly I can’t read these to you on a dignified occasion as this. But there are poems which are compelling in their insight and understanding of the human experience, not only but mainly as it is lived in the hills.

One of them, ‘Blizzard’, was published in 1981. Its subject is the death on a walk in Glen Doll of five Glasgow lads at New Year in the winter of 1959. No other poem I know conveys so acutely the feelings of exhaustion - and terror - which walkers and climbers can feel when they’ve been caught out unexpectedly on the mountains by a sudden storm, in white-out conditions when you can hardly open your eyes because of the force of the driving snow and can only hear the roar of the wind.

‘Falling and getting up and falling
Sinking in snowdrifts, lurching, crawling
The stinging blows, the booming sound
Of wind, the whiteness swirling round’

It is appropriate that Syd Scroggie should be honoured on this occasion. The graduates here have learned a great deal about what medical science can do to ease suffering and cure the sick and injured.

But there were limits to what could be done in that Naples hospital for Syd Scroggie.. The rest he has done himself.

He demonstrates how powerful the human spirit can be in the face of adversity. He has not only risen above his physical impediments in his own life, but through his example, friendship, lecturing, and writing he has shared with others his passion for living - and love of the hills.

He is a most extraordinary vagabond.

Chancellor, I have the honour to invite you to confer upon Mr Syd Scroggie, the degree of Doctor of Laws.