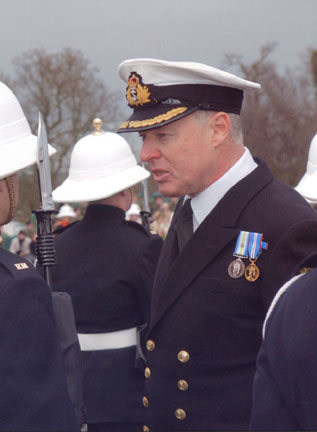 I spent 6 happy years at Harris Academy, 1963-69, finishing as Forres House Captain, though not a Prefect due to my inconsistent use of school uniform. After graduation from Dundee University and 2 years secondary school teaching (while playing professional football for Forfar Athletic), I joined the Training and Education Branch of the Royal Navy in 1977. I passed the All Arms Commando Course at the Commando Training Centre, Royal Marines in 1979 then spent 7 years serving with the Royal Marines in a range of training support/operational roles; deployments included the Falklands War with 42 Cdo and 4 Winters in Norway.

I attended RN Staff College, Greenwich in 1986 and, after promotion to Commander in 1989, spent 2 years in SHAPE, Belgium as the staff officer for Nuclear Policy before returning to the Royal Marines as their Chief Training Support Officer. In 1995, I took up my first appointment to the Central Staff, MOD as the desk officer for training equipment requirements and warfare team training policy within the Directorate of Operational Requirements (Sea).

Promoted to Captain in 1997, I stayed in the Central Staff as the Deputy Director for Physical Security Policy, a task which included counter-terrorism, guarding and policing policy for all MOD establishments including WMD related sites. From 2000 to 2002, I served as the first Director Naval Training and Education responsible for Naval Service policy development and implementation, before becoming the first non-RM Director of Training/Deputy Commandant of the Commando Training Centre, RM, Lympstone.

I was promoted to Commodore on appointment to SHAPE, Belgium in 2004 as the Chief Special Weapons Branch responsible for NATO WMD policy, concepts and operations. Following NATO re-organisation, I was appointed to my current post as Director Training and Education in the Central Staff, MOD HQ where I now drive individual training and education policy pan-MOD.

Still married to Norma, (Reid) who was House Captain of Kinloch, after 33 years, and with two sons Robin (21) and Sandy (19) still spending my money, I enjoy golf, football, tennis and skiing subject to a gradually disintegrating body and inadequate leisure time.

Since this feature was originally published, Commodore Miklinski has been awarded a CBE in the New Year's Honours of 2007.