The Minutes of the AGM will be published in due course.  Meantime, click on Council etc and Contact to note changes in posts.

A Cheese & Wine Evening was held on Tuesday 7 June 2016 in the new School building on the Perth Road site, courtesy of the Head Teacher, Barry Millar.  The evening commenced with tours of the new building guided by S6 Pupils, followed by a Cheese & Wine and soft drinks Reception. The Vice President, John Baxter, welcomed those present and thanked the Head Teacher for facilitating the event, and the Senior Pupils for their commendable support.  Everyone was very impressed with the new building and amazed at the wonderful facilities provided for the Pupils of today.

The Minutes can be downloaded HERE.   Click on Council etc and Contact in the sidebar to see changes in posts.

The 2016 Burns Supper was held in Invercarse Hotel, Perth Road, Dundee, on Monday 25 January 2016. This year the celebration followed the traditional format. The Speakers were Jim Gray, a former member of the School's English Department (The Immortal Memory), Dr Alan MacDonald, a Historian at Dundee University (Toast to the Lasses), and Rev Dr Janet Foggie, Minister of the Trades Kirk (Reply to the Toast to the Lasses). The Haggis was piped in by S3 Present Pupil Ciar Milne, and then addressed by the evergreen Jimmy Lockhart, and traditional Musical Entertainment was provided by Tayside Young Fiddlers. Channel 4 Cameras and crews were present to record various moments of the event and will be broadcast on Channel 4 at 8 p.m. on 14 March 2014 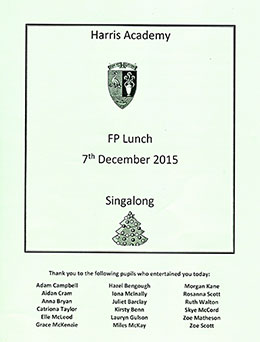 The December Lunch was held as usual in Invercarse Hotel, Perth Road, Dundee. The event had a special touch to it this year in that Present Pupils of the School, under the direction of Miss Findlater (PT Music) and Mrs Hamilton (Woodwind Instructor), provided musical entertainment, mainly of a Festive nature, to get Former Pupils in the mood for Christmas. The String Quartet launched the programme with a slow Scottish Air and Irish Jigs, Skye McCord (S3) followed with the song "I'll be home for Christmas" (made famous by Bing Crosby), Advanced Music Pupils Anna Bryan and Juliet Barclay (both S6) followed with Cesar Franck's "Ave Maria", and finally the big sound of the large Woodwind Ensemble accompanied Former Pupils in a "Singalong" of "Hark! The Herald Angels Sing", "Jingle Bells", and "Rudolph, the Red-Nosed Reindeer".  The Singalong took some Former Pupils by a bit of a surprise after a hefty Christmas Lunch, but Harris Education prevailed, everyone sang lustily, and today Invercarse are checking the Ballroom for structural cracks.

Miss Findlater, Mrs Hamilton, and the Pupils were thanked for providing entertainment of such a high standard, and Former Pupils hope that the Present Pupils enjoyed the splendid occasion every bit as much as they did.