"For the Fallen" (Binyon)

"They shall grow not old, as we that are left grow old;
Age shall not weary them, nor the years condemn.
At the going down of the sun and in the morning
We will remember them."

Members of the Association and their guests were again invited by the School to attend its Armistice Day Ceremony which was held in the foyer of the School at Lawton Road, Dundee.   The assembled congregation of Staff, Present Pupils, Former Pupils, and Guests, were welcomed by the Acting Head Teacher, Mrs Angela White, on behalf of the School and by Dorothy Drummond, President, on behalf of the Association. Former Pupil Mrs Mary Train laid a Wreath on behalf of the Association, and the School Captains, Callum Ellis and Jessica Trickett, laid a Wreath on behalf of the School. Laments ("Flowers of the Forest" and "When the Battle's O'er") were piped by Pupil Connor Bell, while accompaniment to the Hymns, "Eternal Father" and "Abide with Me" was provided by the School Wind Band, conducted by Miss Audrey Bird. Mrs White recited Binyon's tribute "For The Fallen" before the Two Minutes Silence. The Last Post was sounded by Pupil Oscar Holm-Huxley. Pupils Sam Pirrie and Gosia Galas provided their reflections on the Armed Forces and past conflicts following their meeting with representatives of the Black Watch Association.

The School Chaplain, the Reverend Andrew Greaves, led Prayers and concluded this moving Ceremony with the Benediction. 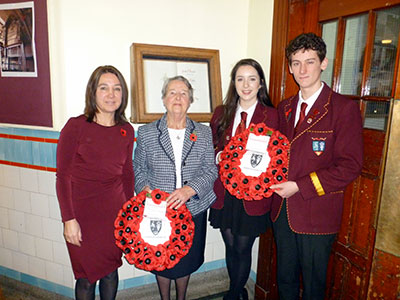 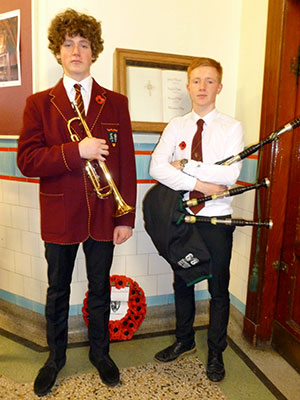 A special Lunch was held in  Invercarse Hotel on Monday 1 June 2015 to enable the Association to bid farewell in a social setting to the Head Teacher, James (Jim) Thewliss, who is retiring and taking up the post of General Secretary of the Head Teachers of Scotland Association.  Tributes which had been paid to him at the Annual General Meeting of the Association on 20 April 2015 were repeated on this occasion by the President, Miss Dorothy Drummond,  and, on behalf of the Association, she presented him with a framed print of Gordon Laird's nostalgic and well-known painting of the 1931 Harris Academy Building in Perth Road to remind him of his happy days there.  Membership of the Association was also conferred on Jim, and both the symbolic framed Certificate to that effect and the dedication on the reverse side of the framed print bear the acknowledgement "in grateful recognition of the unfailing and loyal support which he has offered so generously to the Association and his constant interest in its affairs during his period of tenure". 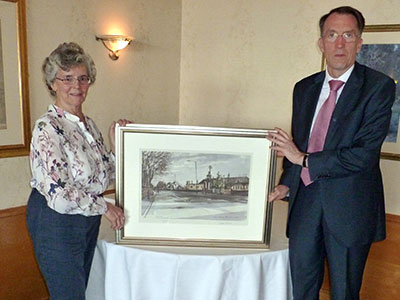 The President presents Jim with a painting of the school 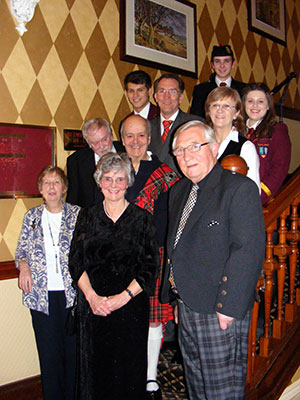 The Association celebrated its Burns Evening at Invercarse Hotel on 26 January 2015. Over 80 Former Pupils, Present Pupils, and friends attended.  The Haggis was piped in by Present Pupil, Ruaraidh Proctor, and addressed by James Lockhart. Present Pupils of the School launched the evening’s entertainment with a vocal and instrumental Scottish Musical Medley, after which the evening’s speaker, Michael Mulford, a retired journalist and FP, produced imaginative and compelling evidence to support his belief that Burns was one of the first investigative journalists.  There followed a display by The Royal Scottish Dance Society, and Ian Colligan recited “The Wee Cock Sparra” before entertainment concluded with a testing Burns Quiz.  The Vote of Thanks and Toast to the School were proposed by James Thewliss, Head Teacher of the School, and the President, Dorothy Drummond, respectively.

The Association ran a Street Names Quiz in December 2014. Congratulations to the winner, Mrs Sylvia Alexander. Did you enter? Find the answers here... ...read more

Wednesday, 26 March 2014 at 7pm
The School Music Department held a Spring Concert at 7 pm on Wednesday 26 March 2014 in the Music Centre, West Bell Street, Dundee. The sizeable audience, which included a good number of FPs, was treated to a wonderful display of musical talent. The PT Music, Miss Shelly Findlater, the Instructors, and the Pupils, deserved the highest praise for staging such a brilliant Concert which was thrilling from start to finish and although it would be unfair to single out particular performances the level of ability was, in some cases, quite extraordinary.