Meghan McIntyre, a 6th year Pupil in Session 2014/15, and House Official for Cawdor, along with with four others who represented the House, were directed by Mr Thewliss, the Head Teacher, to make a presentation to an assembly of the whole of Cawdor on the theme of 'legacy'. ...read more

"For the Fallen" (Binyon)

"They shall grow not old, as we that are left grow old;
Age shall not weary them, nor the years condemn.
At the going down of the sun and in the morning
We will remember them."

"When you go home, tell them of us, and say,
For their tomorrow, we gave our today."

The Reverend Andrew Greaves led Prayers and concluded this moving Ceremony with the Benediction. 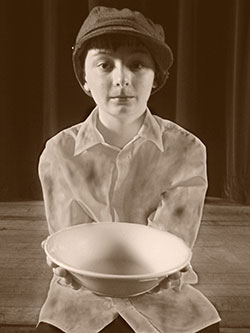 (By kind permission of MusicScope)

The School staged its final Musical in the Perth Road building on 10 and 11 June 2013. Many Pupils and Staff were involved in the undertaking, including performing on stage, playing an instrument in the Orchestra, publicising the event, designing and painting the set, helping out backstage with costumes, makeup, and stage management. The Performances were conducted by PT Music, Miss Shelly Findlater.  The efforts in staging this production were rewarded with excellent houses at the performances which were greatly enjoyed by the audiences.